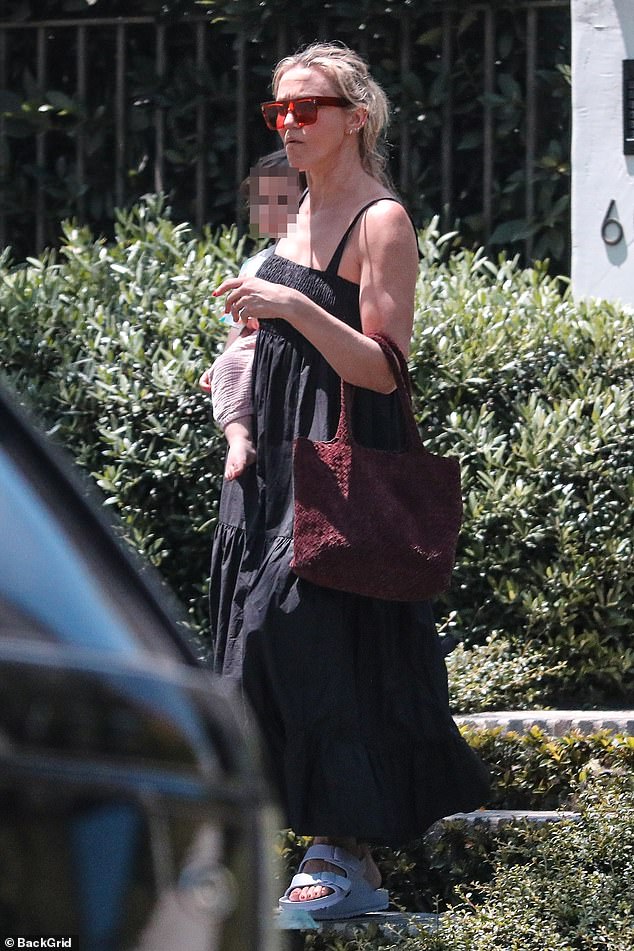 Her last major film role was way back in 2014 for the remake of the musical Annie.

But Cameron Diaz was focused on other things on Tuesday, when she was seen holding baby daughter Raddix in her arms as she made her way to the car in Beverly Hills, California.

The Mask actress, 48, was summery in a black maxi sundress with thin straps.

The long flowing dress hung from the elastic bust in soft ruffles all the way down to Cameron’s ankles.

She wore light-colored Birkenstock-style sandals, and had a pair of red sunglasses on.  Her blonde hair was pulled back into a messy ponytail with strands hanging down around her face.

Diaz sported three small hoops in her left ear, and had a maroon woven tote bag hanging from one elbow.

She held one-and-a-half-year-old Raddix, whom she shares with her husband Benji Madden, in her other arm.

The mother-daughter pair were apparently leaving a private home after attending a swim class for the little girl.

Since leaving a career in front of the camera behind, the Being John Malkovich star has largely focused her time and energy on Avaline, a vegan and organic wine label she launched with her friend and partner Katherine Power.

Cameron is also focused on family life, after marrying Benji, lead guitarist and backing vocalist of band Good Charlotte, in 2015.

The pair went on to welcome baby Raddix on December 30th

Diaz Explains Why She Quit Acting